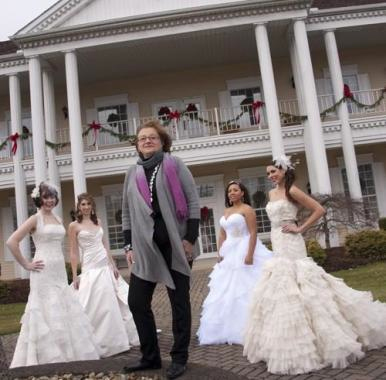 While giving a tour of her popular bridal shop, Patrice Catan-Alberty suddenly spots something she doesn’t like on a rack of new deliveries. From among the variety of dresses on the rack, Patrice notices the beading on a particular gown from a prominent designer. The conversation stops mid-sentence as she moves in to

“Look at this,” she says, pulling a bead between her thumb and index finger. “Plastic. I am going to call them and they are going to take this back. You don’t put two-cent beads on an expensive dress like this. It’s absurd.”

Such attention to detail is one of the things that has made Catan Fashions the largest freestanding bridal shop in the country, with 54,000 square feet of bridal gowns, dresses for bridesmaids, proms and other special occasions, along with accessories like shoes and jewelry. They also provide full-service wedding and event planning and accessory rentals.

“We have brought New York fashion to Strongsville,” Patrice says proudly. “People come here from all over the country. We sell the best products and I hire the best people so my customers can always be assured that they are going to get the best service.”

Since starting the store in 1988, Patrice has developed personal relationships with many of the world’s leading designers and she has become one of the most respected retailers in the business. Each year she speaks to hundreds of attendees at the Mon Cheri Academy, an annual program for fashion merchandising and retail management professionals. She offers consultation to bridal stores around the country.

If you think you have to pay an extravagant price for Catan’s knowledge, experience and quality, that isn’t necessarily so, Patrice says.

Budget conscious brides can find fabulous, discontinued, mint-condition selections for more than 40 percent off at the new Catan Express shop inside the store.

Patrice says she learned everything she knows about business from her late father, Pat Catan, who founded the family-owned craft business headquartered in Strongsville.

“My dad was the pioneer of the arts and crafts business in the United States,” she says. “He was brilliant and he was the most hardworking and humble man there was. He taught me that honesty, integrity and hard work will take you to the top.”

Patrice worked in the family business, earning her own reputation in the industry, before deciding to move into the bridal business in 1988. The arts and crafts materials her father distributed around the country inspired her.

“I looked at the sophistication in some of the items we imported from the Orient and started to incorporate them into cake tops and elegant party decorations,” she recalls. “I showed them to my father and announced that I wanted to go into the bridal business. Being the visionary that he was, he told me to go ahead.”

The shop started in the back of the old Pat Catan’s craft store on Pearl Road. In 2003, Pat Catan’s moved into its new headquarter location about a half-mile south, leaving room for Catan Fashions to expand.

“To make it in the fashion business, you have to be tough as nails.”

That was the advice Pat Catan gave his daughter as she started on her new venture.

“I was well known wherever I went in the crafts business because of my family’s reputation,” Patrice recalls. “When I started in the bridal business, I was on my own. I didn’t have anything to fall back on.”

In 1988 she went to New York to attend the first couture bridal show and to introduce herself to anybody who was somebody in the business. She made a cold call to Jim Galina, a major designer.

“I said, ‘I don’t have an appointment, but I will one day own the largest bridal store in the country,’” Patrice recounts. “I also told him that if he let me in, I would guarantee that I would remember him and I would always be loyal, but if he didn’t I would never come back.

For some reason he took a liking to me and he let me in the door.”

She not only made an impression on Jim Galina, but once she got inside his office, she met Hedda Kleinfeld, owner of the legendary Manhattan bridal shop, as well as a leading writer for Brides magazine.

“They told me I was spunky,” Patrice says. “They started to give me advice and told me that they would get me into any door I wanted. After that, the business grew on loyalty and honesty.”

“All of our alterations are done in-house,” Patrice says. “Nothing ever leaves my property. And everything is fully insured.”

Unlike most bridal shops, sales people don’t work on commission. The staff takes a team approach to be sure that everything is just right for the bride.

“I don’t believe in commission,” Patrice explains. “I don’t want my customers being pushed to purchase. If a bride is undecided I tell her to go home and think about it. If I lose a sale I lose it. But I am not going to lose it because of buyer’s remorse. I want my brides to have no regrets.”